I live in the middle of nowhere and that means if I want to go hiking I must embark on a micro road trip to reach anything that is hike-worthy. After one experience getting up at 0400, driving for 3.5 hours, hiking for 5 hours, then driving 3.5 hours home and feeling like a zombie for the next four days I decided I needed a way to camp overnight. I enjoy tent camping too, but being the female variety of human I thought I’d be a little safer in my car whilst slumbering in a road groove in a random National Forest as opposed to the limited protection offered by being swaddled in my one-man tent. I had all these ideas of grandeur about how I was going to buy a sick camper and drive across the country and then I realized I’m owned by the federal government so I couldn’t just arbitrarily voyage from one National Park to another as I pleased… damn adulting. The other thing that stopped me from buying some sort of camper was the price. I just finished paying off over ten thousand dollars in debt (I’ll write about that in a future post) and I wasn’t trying to rack up more debt on something that I wasn’t sure if I was even going to like. So, I did what anyone in my situation would do… I turned to YouTube. After watching approximately one million videos I decided I was going to turn the back half of my Honda CRV into a camper. Since I haven’t birthed any creatures and I wasn’t in the habit of running a carpool, permanently removing the back seats from my car wasn’t a big deal.

I’ve done three variations of the car camper with varying degrees of skill level required. Thankfully for me I possessed all the skills!

The first camper I made was the platform style. It’s basically a piece of plywood with some 4×4 posts attached to another piece of plywood. I did add a hinge with… you guessed it, another piece of plywood that folded out when I put my passenger seat forward so I could put a massive air mattress on it. I’m not trying to be uncomfortable when I camp *finger snap noise*. I also attached eyebolts to the underside of the top piece and ratcheted it down to these metal loops in my car so I wouldn’t get decapitated if I had to slam on my brakes.

Pros: I had plenty of room under my platform for all my hiking/backpacking gear, and I was comfy as hell.

Cons: This is it was a pain to assemble solo. So, I hope you have a friend if you decide to try this. I was practically kissing the ceiling when I inflated my air mattress, I may have rubbed of 1/3 of my eyebrow in my sleep from attempting to rollover. Using a backpacking mat was way better but still left me close to the ceiling… aannnndddd there was no room for me to sit up which made changing awkward. You try shimmying out of your bathing suit in 6 inches of space!  Also, because the top was a solid piece it made getting to the containers a bit tricksy.

Grocery shopping was a pain too because I had to arrange my groceries around my gear. Oh… I should have taken my gear out between trips? NO… one must always be ready to camp!

I rocked this configuration for a little over a year then decided to switch it up because when something is mostly working for you that obviously means it’s time for a change.

The second camper style I tried out was the hammock-in-the-car camper. I only took one picture of it but it’s just as well because I discovered my body is not meant to slumber in a hammock.

Buuuttt in case you were curious and have a body build to withstand the pains of being gently cradled in fabric and suspended in the air I shall divulge how I set that beast up. I can’t take credit for this idea either. I stumbled upon it during a shameful session of YouTube binge watching about all things tiny house and camping related.

I angled the hammock across the space in the back of my car like this.

I stuck the rope out of the corner of the trunk and the passenger door (my hammock has rope attached to each end). Then I used a ratchet cargo strap to connect both ends of the rope across the roof of my car.

Con: I discovered I cannot sleep in a hammock. I even did the slanty sleep formation and still the sleep gods shunned me. I also woke up several times during the night because my limbs would take turns falling asleep.

The final configuration (which I have more photos of) went like this.  This is the first time I’ve been camping since I adopted my Blue heeler mix (Kaladin) so I was trying to include him when I was deciding how I wanted the space to flow.

I used the top piece of plywood from my original setup and set it on the ground. I anchored the eye bolts in the plywood to the loops in my car with some rope. I stuffed some gear in the foot groove behind the front seats. The plywood doesn’t quite reach the foot groove so I put some body pillows in that spot too. Then I threw an old mattress topper on the plywood and tucked it under the body pillows. I put on old sheet on it for good measure and because my canine is the shed-king so I wanted to have something I could remove to launder. I have a few cubby-like spaces where I can keep my hammock and my pup’s food bowl. In the picture, you can see some of my gear sitting behind the seat. I’m 5’6 and ¾ but who’s keeping track so I don’t need to sleep at an angle but I do because it gives me more room to pile my stuff up and still spread out. Kal, also has plenty of room to spread. When I have all my stuff loaded in the back I just line one side of the car so Kal can perch in his spot between the two seats or sneak off to the back and nap. 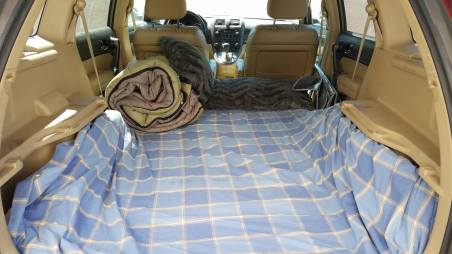 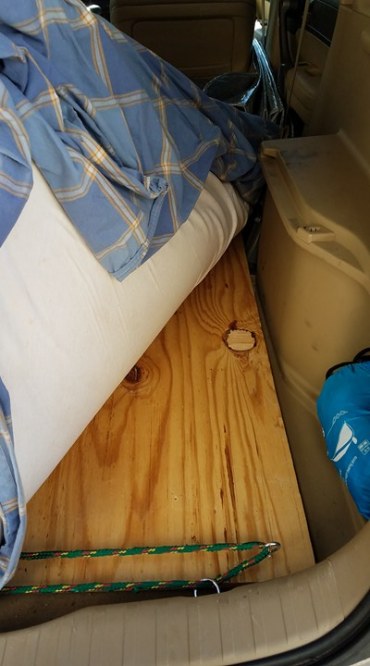 Con: Ummm… There isn’t a separation between my sleeping area and my stuff like with the platform.

2 thoughts on “Camping in the Trunk”